Looks like Valiant hasn't just been secretly busy all these years making comics but also taking their time and developing big screen versions of the Valiant characters.  Check out the press release: 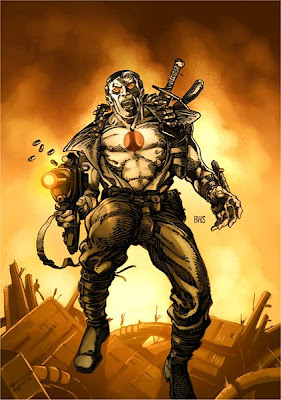 Columbia Pictures is closing a deal to acquire the rights to adapt Bloodshot, the bestselling Valiant comic book character, into a feature film to be produced by Neal H. Moritz through his Original Film banner and Jason Kothari and Dinesh Shamdasani on behalf of Valiant Entertainment, it was announced today by Hannah Minghella, president of production for Columbia Pictures. Jeff Wadlow will write the screenplay.


Bloodshot first appeared in Valiant comic books in 1992 and quickly became one of the comic world’s most popular characters. Appearing in over 70 issues, the character sold seven million comic books globally and was a cornerstone of the Valiant Universe, which sold more than 80 million comic books, third only to Marvel and DC. As Valiant re-launches in 2012, the Bloodshot character will return to shelves as well.


Commenting on the announcement, Minghella said, “The Bloodshot character has been a fan favorite for nearly two decades, selling approximately 7 million comic books globally. Because there have been more than 1,500 pages of storylines published, there is a rich legacy to draw from as we develop the screenplay. Neal is one of the best action producers working today and we know he is the right filmmaker to take on this potential franchise.”


Originally founded in 1989, Valiant Comics quickly became one of the most successful comic book publishers by creating unique and compelling heroes and villains and focusing on storytelling. Valiant characters have been written and illustrated by many of the industry’s most famous creative talents, including Jim Shooter, Bob Layton, Barry Windsor Smith, Joe Quesada, Jim Lee, Frank Miller, Garth Ennis, Warren Ellis, Bryan Hitch, Steve Ditko, Mike Mignola, Kevin VanHook, Don Perlin and Neal Adams, among many others; in addition, Valiant was previously named Publisher of the Year by Diamond Comics Distributors. Valiant is returning to comic books in May 2012 and has a number of movie projects in development based on its characters involving some of the industry’s top business and creative talent.


Neal Moritz and Original Film are currently in post-production on four films: 21 Jump Street and Total Recall for Columbia Pictures, R.I.P.D. for Universal, and Warner Bros.’ Jack the Giant Killer. He is entering pre-production on the sixth entry in the Fast and Furious franchise as well as on Dead Man Down, starring Colin Farrell and Noomi Rapace. With over 40 films to Moritz’s credit, past titles include Battle: Los Angeles, The Green Hornet, The Fast and Furious series, I Am Legend, XXX, S.W.A.T.,Gridiron Gang, Sweet Home Alabama, Click, Vantage Point, Blue Streak, Cruel Intentions, I Know What You Did Last Summer, The Skulls, Volcano, Urban Legend, and Juice. Original Film’s box office is north of 2 billion worldwide.


Last we heard Matthew Vaughn was in line to direct the movie and a script was being written. No word on if Vaughn is still involved but they have a blockbuster producer in tow now and a major studio. A Bloodshot movie could be a massive franchise if done right. Excited to see how this one pans out.
at 4:17 PM