UPDATE: This post is part one of a two part series on the Valiant Files: Secrets of the Harbinger Foundation trading card set and provides a round up of all known details. Click here for part two which focuses on the unpublished art from the card set.

The what now?? I said, The Valiant Files: Secrets of the Harbinger Foundation trading card set (often mistakenly called The Harbinger Files trading card set). The little know set was announced, promoted and mysteriously canceled. New art was created, trading card boxes were designed, promo cards were even released! Very little information has been released about the set and its ultimate fate. As I'm obsessed with the set, I'm going to try and cover everything that is known about it here on this blog. The best source of information comes from an article in Triton Magazine Issue #5 (which incidentally was bagged with one incredibly rare and randomly inserted Valiant Era II Thank You promo card!). The article also provides one of the only looks at what a Valiant Files: Secrets of the Harbinger Foundation card would have looked like. 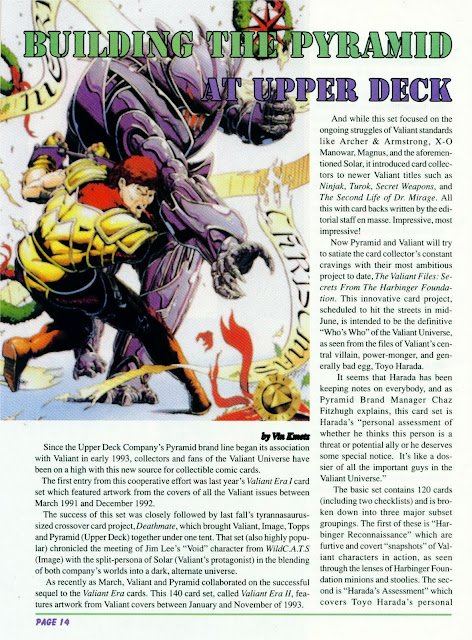 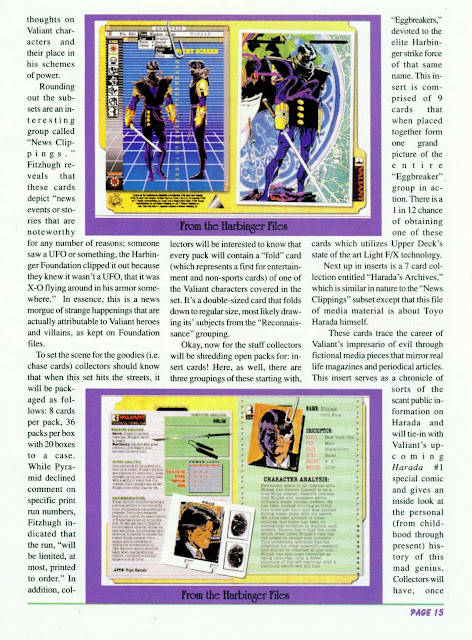 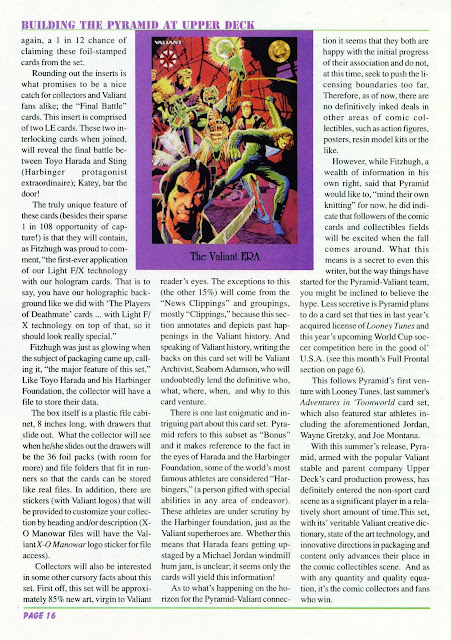 For those too lazy to read the article here are the highlights. 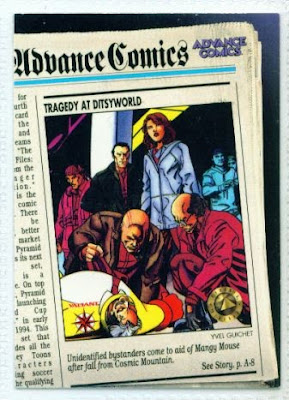 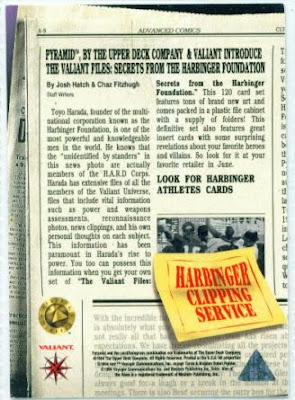 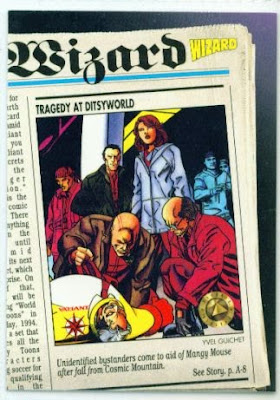 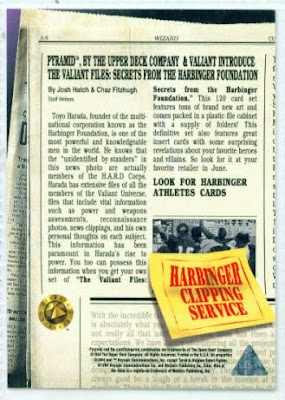 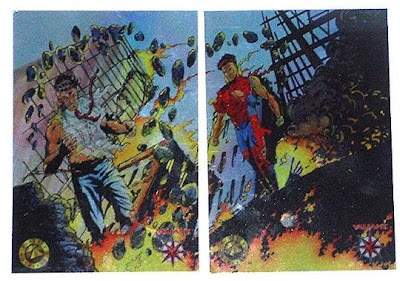 In addition to the promos and the Ninjak "fold" card from the Triton Magazine article, a couple of work in progress mock ups have turned up. The first set of mock ups are full color. One seems to be part of the Harada's Archives chase card set but features text from a basketball card on a fake TIME Magazine clipping. The other seems to be part of the Harbinger Reconnaissance subset and features what looks to be final text for the card. Take a look below. 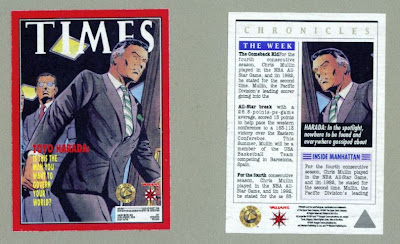 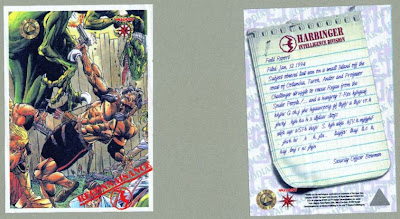 These cards are mounted on card stock possibly for presentation. Were these internal presentation materials shown to Valiant by Upper Deck? It's very possible but not known for sure. The Harada card is labeled "Hidden Harada 2" and the Turok card is labeled "A. Reconnaissance Card". It is possible there are more presentation pieces out there waiting to be discovered. Check out these views of the cards on the card stock. 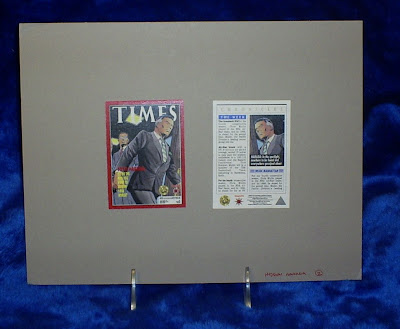 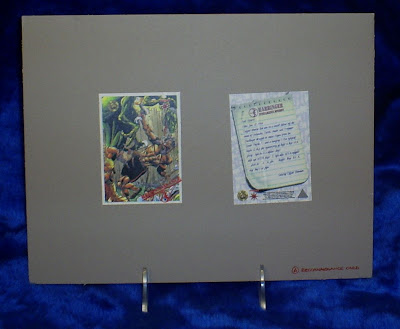 The second set of mock ups are black and white. Again, the text on the cards has nothing to do with Valiant and instead refers to basketball. They look to be design guides. The six mock ups all feature a Harada's Archive logo. We can therefore assume that they are from that chase card set. The cards all feature tweaks on real life magazine cover designs, though I can't tell which ones they are meant to be except for the Orb Today newspaper which has the USA Today look. Pretty cool to see the Orb Industries logo on a newspaper from this card set. Check them out below. 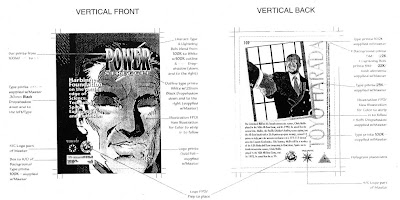 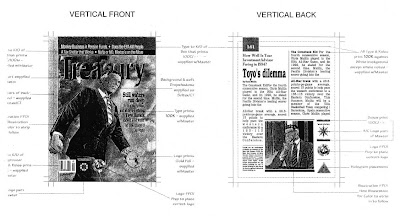 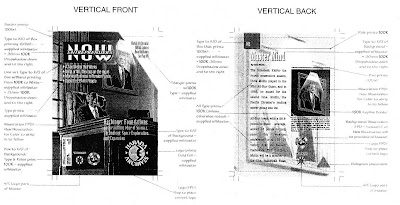 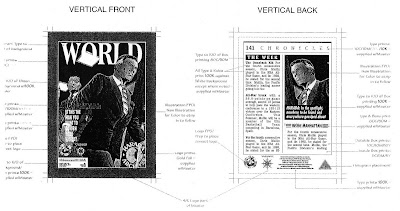 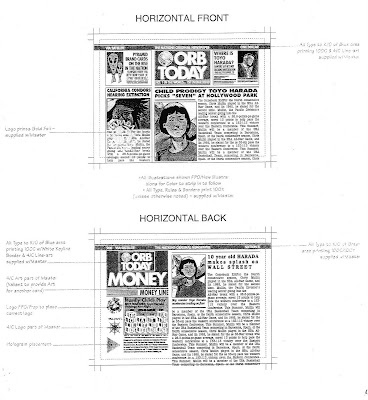 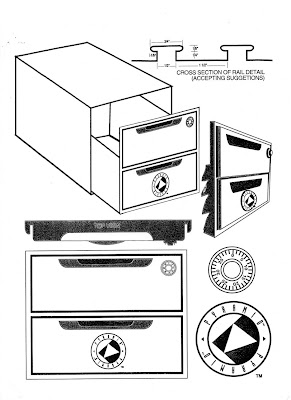 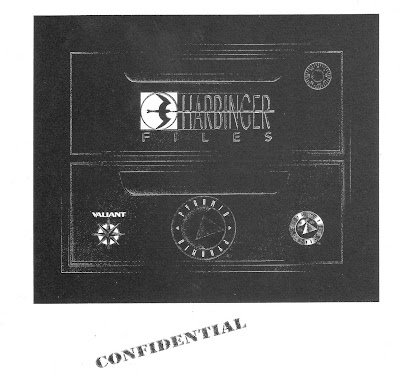 Over the years a lot of the new art that was created specifically for this set has made its way to the public. I will be chronicling the art that I've run across in future posts about The Valiant Files: Secrets of the Harbinger Foundation trading card set. However, below is a partial checklist of the what the set would have been. It is based on numbering from the pieces of original art that were intended for the set.

For a more complete list and scans of the art visit part two.
at 3:47 PM