I've been spending the morning roaming the streets of eBay town and have been pleasantly surprised by what I've found. Quite a few of the recent Valiant comics variants are fetching big prices. I'm going to spotlight a few today. First up - Eternal Warrior (2013) #5 1:50 David Mack variant.

This book precedes Rai (2014) #1 by almost 5 months and therefore is the first appearance of the 4001 timeline in the VEI universe. It's also the first appearance of Gilad, the Eternal Warrior in 4001 (known then as the Eternal Emperor). With big things being teased for 4001 in 2016 fans will want to make sure they have a copy of the most rare version of Eternal Warrior (2013) #5 and the 1 in 50 David Mack variant is just that. 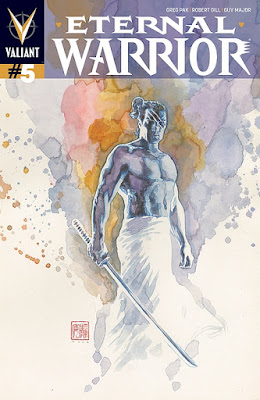 What makes this book even more desirable is that it's almost impossible to find! No one knows for sure but estimates of the print run for this book are as low as 800 copies. Copies were available through comic dealers and on eBay when the book was first released. Back then the book was commanding prices in the $30-60 range. About average for a 1 in 50 variant.

In the last 12 months, two copies have popped up on eBay. Both were ungraded copies that were advertised as NM. They finished at $306 and $301 each!!