Spent the morning surfing eBay and was happy to see so many recent Valiant comics variants fetching big prices. I posted about another one here and now I'm going to chat a little about - Harbinger Wars (2013) #3 1:25 Patrick Zircher variant

Harbinger Wars is the crossover event storyline Valiant published in 2013. Spoilers: it is AWESOME. It was a critical darling and if I remember correctly a sales success too with several issues going back to press for new printings. The storyline ran through Harbinger Wars #1-4, Harbinger #11-14 and Bloodshot #10-13 but you only needed to read Harbinger Wars #1-4 if you wanted just the core story. The crossover introduced many new elements to the Valiant universe (i.e. Generation Zero) and brought a few old ones back too (i.e. H.A.R.D. Corps).

This book is the first appearance of H.A.R.D. Corps in the VEI universe. After conquering comic book publishing with a string of chart topping books and a line of the best reviewed comics in the industry, Valiant recently announced it's first steps into movies. They announced a partnership with Sony and a 5 movie plan that includes Bloodshot 1, Bloodshot 2, Harbinger 1, Harbinger 2 and a crossover movie in Harbinger Wars. Crazy huh? Why announce 1 movie when you can announce 5 I suppose. Well, with Bloodshot, Harbinger and Harbinger Wars making there way to the big screen you can bet your bottom dollar that H.A.R.D. Corps will be getting the cinematic treatment too. When that happens, this is the book to own. It's the rarest version of Harbinger Wars #3, the first appearance of H.A.R.D. Corps in the VEI universe. 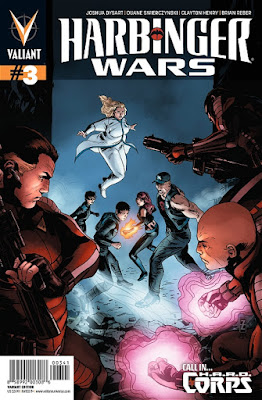 What makes this book even more desirable is that it's rare. No one knows for sure but estimates of the print run for this book are as low as 1000 copies. Copies were available through comic dealers and on eBay when the book was first released. Back then the book was commanding prices in the $20-40 range. About average for a 1 in 25 variant.