Valiant is massively successful at the moment. Breaking sales records left and right, winning critical acclaim and awards every year, inspiring major Hollywood talent to come onboard their movies, and really just making some of the best damn comics anyone has seen in a long while. It should come as no surprise then that many of their high end variants (especially those featuring first appearances) from the last several years are starting to become very in demand and therefore...very expensive. Just last week I wrote about how popular, hard to find and, therefore, expensive some of the new VEI variants have become. I spotlighted two books in particular - Eternal Warrior (2012) #5 1 in 50 variant and Harbinger Wars #3 1 in 25 variant. Today, I'm going to tackle another - Harbinger (2012) #8 1 in 125 line wide variant by Jeff Lemire.

First, what is a line wide variant? It's a variant tied to the number of copies a retailer orders of not just the regular cover of the same book but the regular covers of every Valiant book from that same month. The month Harbinger #8 went on sale I believe there were a total of 5 Valiant books (X-O Manowar, Harbinger, Bloodshot, Archer & Armstrong and Shadowman). So while 1 copy for every 125 ordered sounds like a high threshold it really isn't. It's 1 copy for every 125 copies of any Valiant comic ordered that month OR 1 copy for every 25 copies (125 ÷ 5 titles) ordered on average of each Valiant book that month. Not so bad really. 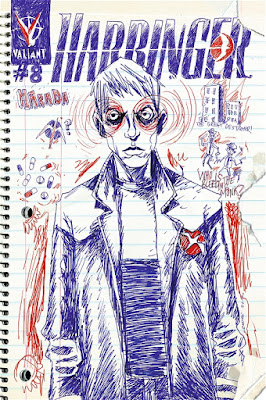 But then you have to factor in all the positives. This book is the  first appearance of Torque in VEI continuity and the  first appearance of Torquehalla anywhere. It's also one of the coolest variant covers every produced. The story behind the variant goes that superstar writer Jeff Lemire was a huge fan of the 2012 Harbinger comics and expressed his love for the book at a DC Comics panel. Valiant heard about this and so Valiant Chief Creative Officer, Dinesh Shamdasani, and Valiant Editor-in-Chief, Warren Simons, approached Lemire about collaborating. The collaboration started with a cover. Lemire pitched a bunch of ideas including one for a ball point pen image drawn on actual lined notebook paper. Valiant loved the crazy idea and thus was born one of the coolest variants ever created! Valiant knows how cool it is too, they've produced a ton of merchandise featuring this art including sweet tee shirts!

Adding to the books desirability is that it's very hard to find! No one knows for sure but estimates of the print run for this book are as low as 1,000 copies. The copies that were available when the book was first released went into the collections of the Valiant faithful and have stayed there. Only a handful of copies have returned to the marketplace since. Those copies that did come up for sale again have been the subject of slowly intensifying bidding wars as the Valiant fan base continues to grow. In the last 12 months, three copies have popped up on eBay. All were ungraded copies that were advertised as NM. The first finished at $109! The second finished higher at $153! The most recent, ending on eBay just today, finished at $207! This one is one to keep watching.