Following on from the last post, did you know that the silhouette on the cover of Rai #0 is actually a swipe? 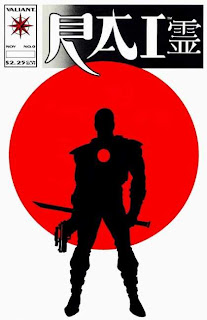 The cover shows the silhouette of Bloodshot (whose blood is part of the origin of the Rai lineage) and is drawn by artist David Lapham. But the concept was first sketched out by writer Jim Shooter. Shooter didn't have enough faith in his illustrating skills so he grabbed a copy of the Official Handbook of the Marvel Universe Deluxe Edition #10 (1986). and traced a Mike Zeck drawn image of Punisher! Lapham kept the look and the cover of Rai #0 ended up being a swipe. Don't believe me? See for yourself.

Here is the Punisher image in question.

And here is a silhouette created from said Punisher image. 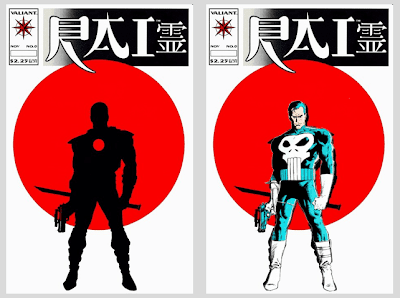 Credit to both ValiantFans.com and ComicBrowser.com for the images.

UPDATE: Here is a direct quote from an interview with Jim Shooter explaining the swipe.

I actually drew the cover to Rai #0. It was just a silhouette, so someone had to fill it in and ink the dot. We had obviously planned the look of the character by that point. And I should admit this, in the interest of fairness: I was looking at a drawing that Mike Zeck did. I mean, I'm not that good an artist and the only reason I did it was that we didn't have anybody with a free pair of hands who could do it. If we'd had a real artist available, somebody else could have done it, but I ended up doing this because it was a silhouette. I figured, You know, I could do this. So I did just to save time for Bob and for Don and the other guys. I don' t think anybody could tell it was done by an amateur.