In honor of my very first post I'm going to talk a little about the cover of Magnus Robot Fighter #3, how I became a Valiant fan and how I began reading my Valiant comics. Now, I'm a comic book child of the 1990s. I got into comics because of the excitement they were generating. I remember the Death of Superman, the hologram covers celebrating Spider-Man's 30th anniversary and the launch of Image Comics. But the event that people seemed the most excited about back then was the birth and rise of Valiant Comics. My friends and I would read in Wizard Magazine about this new company whose books were rare but also in demand because they were telling great stories and we would dream of owning them. I managed to get my hands on some early X-O Manowar issues and we all bought our copies of Bloodshot #1 but none of us could afford or find the A-grade Valiant back issues (save for one friend who managed to snag a copy of Magnus Robot Fighter #12, and I still hate him for it). So we were left no choice but to oogle the cover images published in magazines and dream of what could be.

About a decade later. Acclaim Entertainment has bought Valiant and completely mismanaged it. The size of the comic book industry has nose dived. Valiant back issues are cheaper than they have been since the day the books were released. And I am feeling the urge to take a trip down memory lane. I hop on eBay and find a set of Magnus Robot Fighter #1-4 with the Magnus Robot Fighter #0 coupons and trading cards still intact for less than $15 shipped. Lucky day! When the package arrives, I pull out the books and proudly look them over. Finally, I own my first A-grade Valiant back issues. It's sad, I had dreamed of owning books like these so many times when I was younger that some part of me still doesn't believe it's happening. The feeling is somewhat surreal. Like I am in one of those dreams now. In typical 90s comic book collector mentality, I flick through the books but don't read them. Instead, they are bagged, boarded and stored carefully. But not forgotten. Like a little boy and his treasure, I think about them all the time. Everyday, I pull them out and look them over again. Extracting every ounce of pleasure from their physicality. These are no longer just pictures in a magazine. They are real and they are mine.

The turning point came when I had to fly home for Christmas. I wasn't going to leave without the books. Frankly, I didn't want to be away from them for two weeks. But what if I damage them? They may not be as expensive as they once were but they're still rare I think. I have a duty to ensure these copies are preserved. I better pack them in my carry on to be safe.

The flight is delayed and I have three hours to kill at the airport. I start looking over the bagged and boarded books again. Should I get some food? Nah, I'm not hungry. I really starting to focus on the cover art of the books now. Maybe I should buy a magazine to read while I wait for the flight. I'm looking at the cover to Magnus Robot Fighter #3 now and for the first time I'm starting to think about the characters on the cover. Who they are and what they are doing. What am I going to do for three hours? Wait a minute. What have I been thinking? I should just read these! The breakthrough has been made. I have taken my first step towards a richer though less practiced comic book hobby - reading. 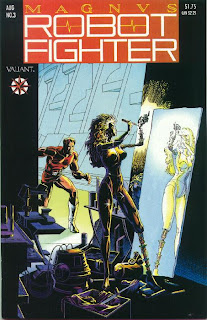 So what was it about the cover that helped me make the breakthrough? Well, I've always loved sci-fi. And I've had this fantasy about reading a great obscure sci-fi novel. In my mind its been in the form of some beat up paperback from the 70s and it has this great sci-fi painted cover (the sci-fi equivalent of Frazetta). I've bought tons of beat up paperbacks with great covers and never found one that quenched the thirst. Here I think I was trying again. The cover tells a story through the actions and emotions of the characters on it. It's very Philip K. Dick? Or maybe something about the colors and lighting remind of Ridley Scott. There's something sexy about it too. The way she holds out her wrist, it's very graceful. And the mirror excentuates the sex appeal. It plays into the objectification of the female body. She is female right? I mean, shes a cyborg? Or is she a robot? And who is that guy spying on her? A rapist? A villain? Or someone stumbling onto something new and exciting? I had to know who this woman was and what she was doing. So I dived in. I started reading issue #3 and quickly found I was in the middle of a larger story. These were not individual stories told one per comic. I had no choice I would have to read all my issues and resign my copies of Magnus Robot Fighter #1-4 to reader grade. But wow was it worth it. Steel Nation (the story contained in Magnus Robot Fighter #1-4) was my gateway into Valiant. It's the single greatest story I've ever read in any medium. It's a masterpiece...but that's a story for another time.
at 5:52 AM