I found these very interesting unpublished panels from Rai #0 at comicartfans.com. Its quite a treat to see unpublished moments from the early Valiant books, especially from a book as important as Rai #0. 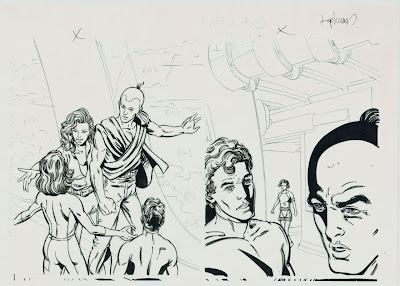 Rai #0 was billed as Valiant's bible to the future. It contains an overview of the major events in the Valiant universe from the present through to the creation of the last Rai in the 42nd century. Rai #0 also includes the ultimate fates of a number of key characters such as Toyo Harada, Aric of Dacia and Obadiah Archer. The story telling is incredibly clever - all the moments shown are brief and told from within a specific context and perspective. Events may be drastically different when told later from a more objective context even though the event itself doesn't change. For instance, we see a memorial for Shadowman, however, we can't truly believe that he is dead since his death is not depicted, his body is not visible and few details are given.

These two panels do not come with accompanying script but we can quickly recognize a few major characters. Specifically, Sting (of Harbinger) and Archer. There are also three unidentifiable women in the panels. The woman in panel one, immediately to Archer's right may potentially be Flamingo (Rai #0 as published explained that they were eventually married). The second women in panel one could be Kris. All the characters look similar in age here to how we know them so we can assume this takes place near present day. Could this be how the Harbinger kids form a relationship with Archer?

Additionally, we can gleam from the art a sense of placement and story by looking at the words written around the art. Above the second panel we see that the panels would have appeared on "page 9" of Rai #0. Below are pages 8 and 9 of Rai #0 as printed. 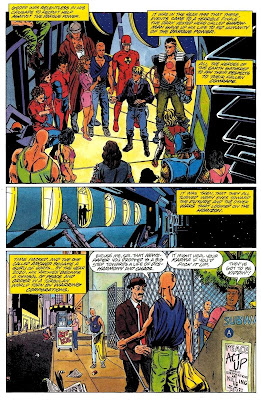 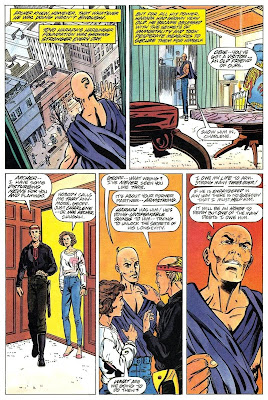 These pages deal with Archer and Flamingo in present day and in contempary settings. The unpublished panels seem to take place in a more futuristic or scientific setting and do not seem to fit within the panels printed. Can they be an alternate story point or possibly a additional story point that was cut for space or even because it would give away too much of a future storyline.

We also see above the second panel the words "Thelma kills" and then some words that I can't make out. Archer's mother is named Thelma and did try to kill him but I don't think that's what is being discussed here. I have no idea who the women in the second panel is but she is definitely not Thelma Archer. If anyone has any more information please share.