Back in 1993, when the speculator market was at its height, I mailed away for the Comic Cavalcade back issue catalog. Now back then these guys, along with Kingpin Comics, were the back issue experts (it even says so right on the catalog!). I recently found that I still had the catalog and was interested to see the kinds of prices key Valiant books were bringing. Below is a scan of the Valiant section of the catalog (click to enlarge). 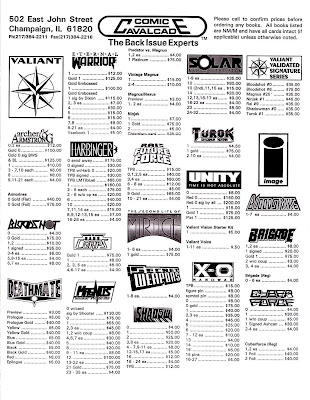 Now, 1993 was smack dab in the middle of the Valiant Era. Had Acclaim not come along and revamped all the great Valiant characters for video games a few years later, I think Valiant had a real shot at becoming the third major universe along with Marvel and DC for good. In 1993, everyone was looking at Valiant and seeing similarities to what Marvel had done in the 1960s. Valiant had the same quality of storytelling, uniqueness of characters and strength of fan excitement. It made sense then to believe that the key Valiant books would in time be as valuable and and sought after as the key Marvel books had become. They certainly were and still are the most valuable and sought after new books created in the 1990s.

Let's take a look at some interesting specifics.
Did I miss anything interesting?
at 4:59 AM