It's the official comic book to the video game of the year - says so right on the top ("der offizelle comic zum videogame des jahres"). It has 60 pages of voodoo and horror, a poster and a contest. And it reprints the variant cover to the English version of Shadowman Volume 3 #1. Check out the below scan to the magazine style German release of Shadowman Volume 3 issue #1 by a company called Dino Comics. 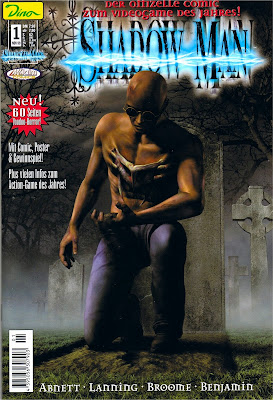 Pretty cool huh? Not as cool as the Italian Solar, Man of the Atom #0 but still pretty cool
at 4:47 PM