I've only done one trivia post (BWS on Shadowman #10) in the past and now its time for another. Did you know ... that the Rai Trade Paperback was originally going to come polybagged with a special expanded edition of Rai #0?! According to a section in the Valiant Special Edition of Comic Shop News called "Valiant's Vision for the Future" it was. Check out the scan below: 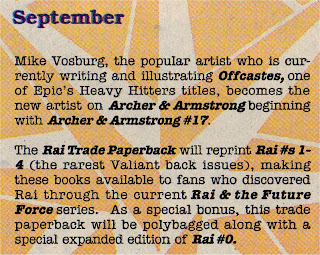 Ultimately, the Trade Paperback printed Rai #0 as published within the book and came polybagged with the Rai Companion...no where near as cool.
at 10:21 PM