After searching for months and months, I finally got my hands on one of the Magnus Robot Fighter freebie giveaway pins that were being handed out by Dark Horse Comics at the San Diego Comic Con this year.  I've heard that while there were tons of bags of free Solar, Man of the Atom badges there was only one small bag of Magnus ones.  No one else I know has one. 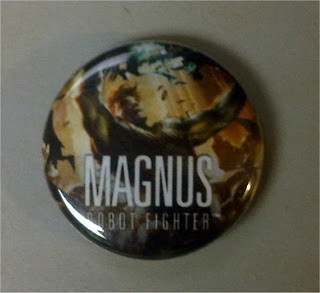 Anyway, I had to pay $30 for it and wanted to ask what every out there thought. Did I get ripped off? Does anyone else even have one?

I've updated my San Diego Comic Con 2010 report to include a picture of the badge - yes, until now I didn't even have a picture of one!