This one is kind of a cheat. It's more of a homage by someone else of Valiant than an example of Valiant influencing something. I may come back and revise this post some day...but for now, check out this cool panel from an issue of The Simpsons comics by Bongo 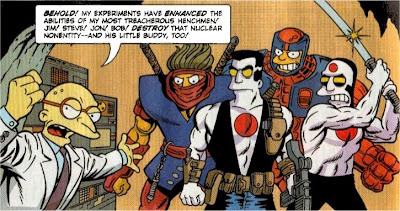 In order to defeat Radioactive Man (which was influenced by Valiant and may be the reason Valiant characters were chosen for this homage) this crazy scientist has experimented on four of his henchmen and created super-henchmen who are eerily similar in look to Ninjak, Bloodshot, X-O Manowar and Rai. The super-henchmen are named Jim, Steve, Jon and Bob, most likely after four of the key creators of the Valiant Universe - Jim Shooter, Steve Massarsky, Jon Hartz and Bob Layton. The choice to spell Jon without the 'h' really gives it away. Pretty neat huh?

My only complaint is why use Bloodshot and Rai? Why not switch one for Shadowman who is equally iconic in visual and doesn't look like a pale guy with a red circle on his chest. Also, the choices of Jon Hartz and Steve Massarsky are interesting as there are a number of others who contributed as much if not more than they did such as Barry Windsor-Smith, Kevin VanHook, David Lapham, Janet Jackson and Fred Pierce to name a few.

This Bongo Comics homage and the clear influence Valiant had on Futurama and on Radioactive Man himself, both of which I've gone into here and here, sound prove without doubt that Matt Groening and Fox are Valiant Comics fans!

UPDATE: I have no managed to track down the issue this appears in - Radioactive Man #106. Check out the cover below. It looks like the setting is Turok's Lost Land and Radioactive Man is using a Golden Key, a clear reference to Gold Key comics which is where Valiant licensed Magnus Robot Fighter and Solar: Man of the Atom. 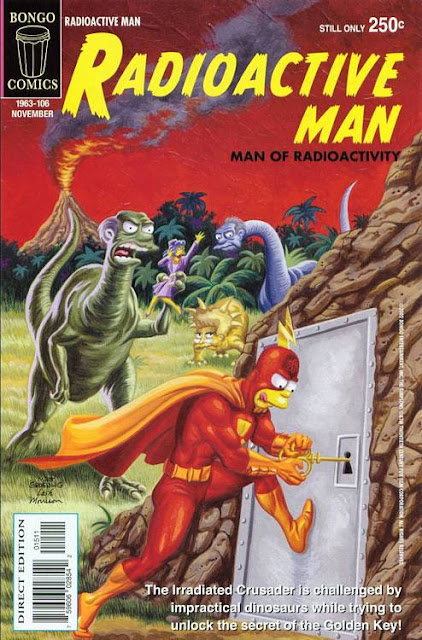