The film Unbreakble starring Bruce Willis and Samuel L. Jackson is one of the very best comic book films to date. It perfectly captures the conventions of comic book storytelling and could only have come from the mind of someone who is a huge fan of the medium. I mean, it's practically a Superman elseworlds story exploring the idea 'what if superman didn't know he was superman'.

I've been told many times that there are lots and lots of Valiant comics on display in the comic book store scene of the film, and each time it has been explained to me that they are there because director M. Night Shyamalan is a huge Valiant comics fan. I don't know if either of these things is true because frankly I've been too lazy to bust out my DVD and watch that scene for the background elements.

However, today (while continuing to be too lazy to watch the DVD) I ran across a still from the movie. Here it is: 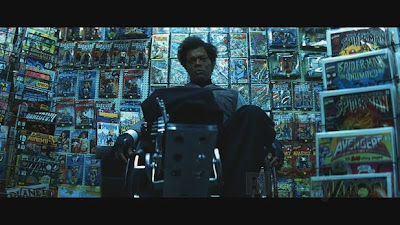 I see a lot of Spider-Man and Namor. A little Punisher and Daredevil. An Avengers book. Hey, what's that in the top left corer???? Just at the edge of the frame, about half way up we see the letters "NT" and then on the next line the letter "R". Here's a close up:

I recognized it immediately (because I'm a a loser and can recognize pretty much every comic I own from only small segments) as the Valiant Reader! 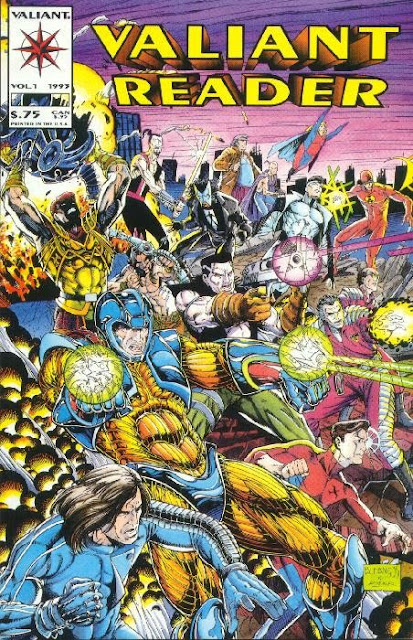 How many more Valiant comics did M. Night hide in the comic book store scene? Is he really a huge Valiant fan? I have no idea. And my laziness prevents me from exploring this issue further right now...but maybe one day I'll do some digging and post my findings in another entry. For now, sleep soundly for Valiant is represented in Unbreakable.
at 12:50 AM