The start of another new series of articles. In this series I will chronicle the as yet unanswered questions of the Valiant Universe, the mystery's and the plot holes. If anyone out there has an answer or wants to point me in the direction of something obvious I've missed feel free to do so.

Master Darque's first full appearance is Shadowman #8. He's covered in shadows on the cover and for most of the issue. In one panel towards the end of the issue we see him from behind and he has four strange blue fins protruding from his back. WTF are those? They are never explained and we haven't seen them since. Is it a mistake on the part of the inker or colorist? Are they shafts of light point at him? Does he have freaking fins?? No idea. But take a look for yourself below. 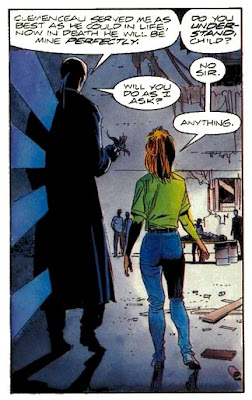 UPDATE: I've had an answer sent in!

In response to your post about Master Darque appearing to be radiating blue energy (a la Solar). When asked Yvel Guichet (the inker of Shadowman #8) said, according to his memory, this was supposed to be the first attempt to do a visual representation of necromantic energy.

I guess they scrapped the idea since we never see Darque radiate energy that looks like that again. At least we can stamp this Valiant Mystery SOLVED!
at 5:24 PM