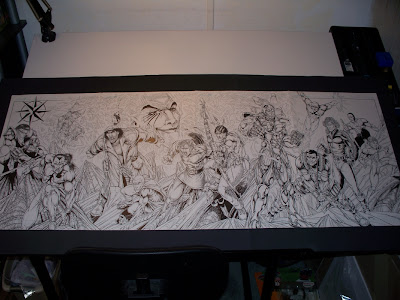 In his own words:

This is one HUGE commission I did for a new friend of mine named Sandra. She really blew my mind when she contacted me requesting a 2-page (DPS) commission of some of her favorite Valiant Comics characters. I must say I was taken aback by her request in that these were some cool characters that I had not seen in many years. Many, Many years! Yes, I am dating myself a little here! I could feel the excitement and love she felt for these characters, so I jumped right on board. I must say that doing this piece was quite an experience. As I said, she had originally requested a 2-page piece, but I wanted to make sure that all of the characters were recognizable, so I asked if I could make it a 3-pager. She said yes, so I set out to complete this monster. Well... as I was bluelining this piece, I noticed that this monster was quickly turning into a Beast! I couldn't stop. I kept going and going and before I knew it, and after many hours of excrutiating pain in my hand and wrist (lol), this 4-pager was born! I had never drawn most of these characters before, so this was something totally new for me. I just hope that Sandra will be happy with this labor of love (I don't even know if she has recieved the final pics in her email yet)and I hope to do more work for her in the future. I decided to go with all of the heroes Sandra requested in the forground, looking like they were on the terrain of some alien world. Almost like they were brought there by a very powerful force, sort of along the lines of Marvel's Secret War. That was where I thought Master Darque would fit in. I made him large in the background and had him with his arms outstretched with those heiroglyphic tattoo things everywhere. Almost like he was spreading them out and using them to create the world that the heroes are on. I put a slight grin on his face to give him that smug, slightly evil look that most villains have. Like he knows he's just a little bit better than everyone else... Even the most powerful of heroes. I was happy with the way most of the characters turned out. I especially like X-O and Turok, but I think my favorite has got to be Ninjak. I just like the way he is sitting there, perched atop that peak. Not really looking like he is bothered at all, just ready for whatever is thrown at him. Isn't that the ninja way though? Just chillin'... Not looking for any trouble, but more than ready to deal with it if it comes along!

Here are some close ups 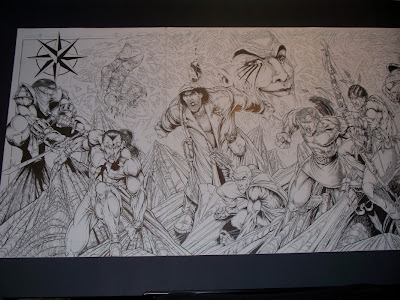 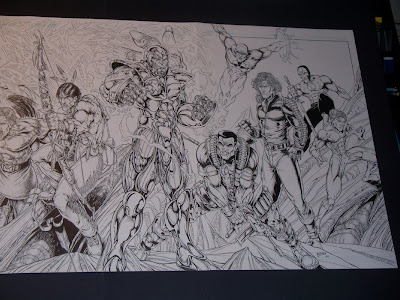 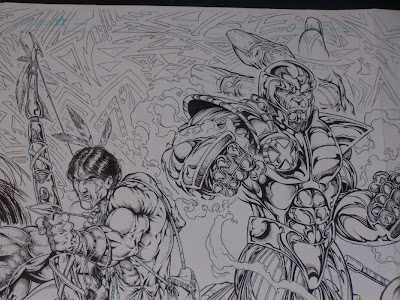 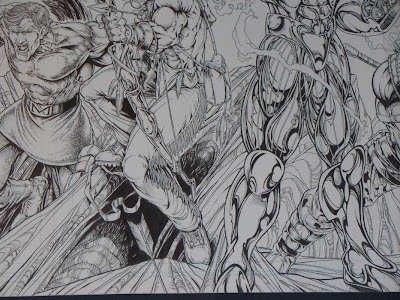 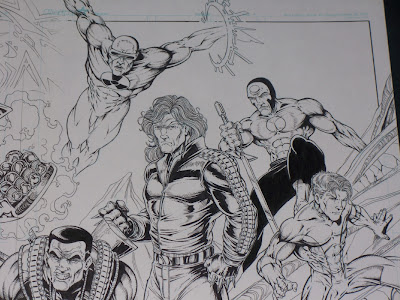 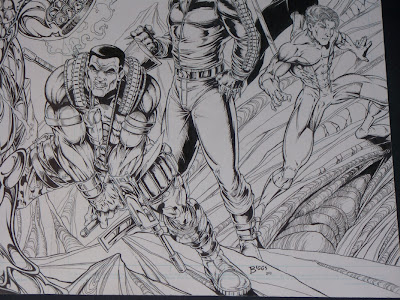 I'm not crazy about the art (the anatomy is awkward, the characters are overly dramatized, the layout is crowded and many of the characters are off spec) or the artists style (bad 90s Image imitation) but I have to applaud the sheer scale of the job.