Deathmate was the much hyped series in which characters from the two hottest comic publishers (Valiant and Image) would crossover, but it was also meant to be the first trading card crossover. Like the comics, where Valiant was responsible for creating and putting out half of the books and Image for the other half, Upper Deck and Topps were each going to put out a trading card set that covered one portion of the events from Deathmate. Upper Deck already had a relationship with Valiant Comics (producing the UNITY, Valiant Era I, Valiant Era II and proposed Valiant Files card sets) and was working with Valiant creators on their set, while Topps focused on the Deathmate Red and Deathmate Black books and worked with Image creators.

Unfortunately, the Topps card set was never released as the books Image was responsible for missed deadline after deadline and interest dropped. I think the set would have been pretty cool and I remember being very excited to see the chase cards (especially the Deathmatrix cards) as well as the new art by Jim Lee. Little is known about what the cards would have contained but we do have some advertisements that tease with nuggets of information. Check out this advertisement from Comic Shop News #317: 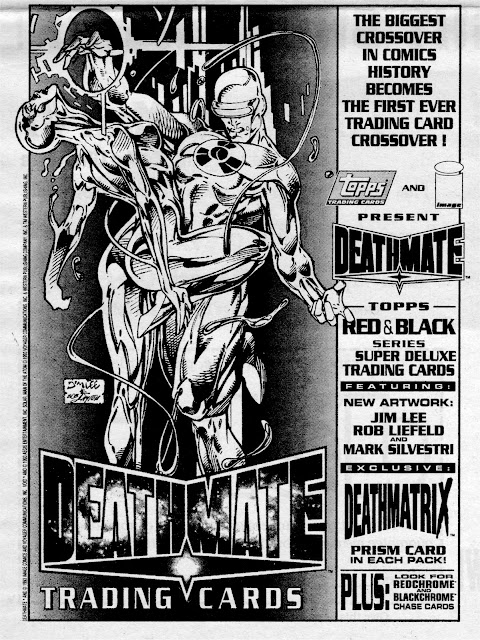 Seeing this advertisement reminds me just how cool Deathmate could have / should have been...the best artists from Valiant and Image combined with the best writers from Valiant! Oh well, at least the creators got rich...
at 3:12 PM