Now, I've got a third Shadowman tattoo for you. See my first two Shadow Man tattoo posts here and here. This time the tattoo is of the symbol from the original comics and it's on an ankle. According to the owner of the tattoo, the image is based on the cover of Shadowman #30. The owner explains:

I didn't know it was going to happen while I was there so I was unprepared. A couple doors down from the tattoo shop was a comic shop. The only Shadowman back issue they had was #30. So I grabbed that and took it back to the tattoo shop. He enlarged the symbol from the cover logo with a photocopier and that's what we went with.

In hindsight, I wish I had been more prepared. Don't get me wrong, I have no regrets at all. It's still my only tattoo and I still love it after all these years. I just wish the light rays were going out to the sides at the bottom like the old version of the symbol instead of being more squared off like the later version. 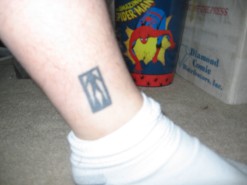 And here is the cover of Shadowman #30 for reference: 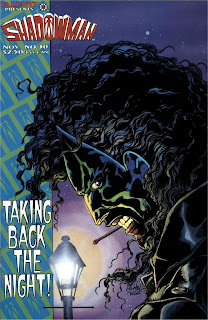 A close up of the logo from Shadowman #30:

And a close up of the original logo (from Shadowman #10):