You often see production errors on books with large print runs so it's understandable that the Deathmate books which had print runs in the millions of copies would have production errors. What's interesting is that they all seem to have the same type of error - the White Variant error. This happens when the foil part of the cover runs out in the printing press and the glossy card-stock paper cover shows through. As part of the promotion for the Deathmate crossover series, Image and Valiant gave out card-stock covers (with no interiors) for Deathmate Prologue at conventions for fans to get signed. To differentiate this giveaway they purposely had the silver foil left out, creating the first white variant Deathmate book. Some collectors have attempted to complete a set of all six Deathmate white variants even though many dispute that white variants even exist for every issue.

And now, some proof of the existence of the white variant Deathmate Red: 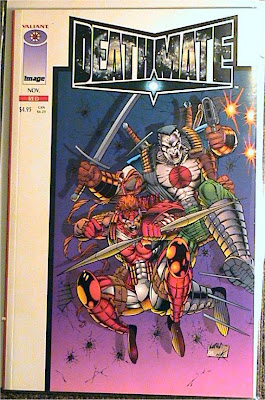