Talk about sensationalizing a story! Warning: The title of the post is completely out of context. Here's what really happened.

1. The Acclaim video game trademark was purchased and put to use by a MMORPG start up as Acclaim Games.

2. Acclaim Games was purchased by MMORPG game developer Playdom in May of 2010

3. Playdom (along with Acclaim Games) was acquired by Disney (who own Marvel Comics) in July of 2010

PS: 5. Disney cancels all Acclaim Games projects in August of 2010 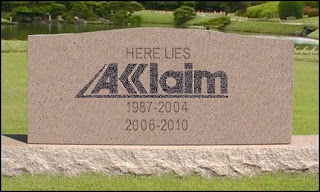 So once again Acclaim video games dies a horrible but much deserved death.
Sources:
Playdom Acquires MMORPG Publisher Acclaim Games
Playdom Acquired By Disney For Up To $763.2 Million
Acclaim games down and out
at 8:56 PM