Here's another cover scan from Previews Magazine. This time it's Previews Magazine IV, no. 3 featuring the Psi-Lords. Note that the cover blurb calls the the title "Starwatchers" which was the original name. The blurb also points out that the title will be appearing in "Valiant Vision" which was the rather cool but probably damaging effect in which cooler colors (e.g. purples and blues) would appear to recede into the background, and warmer colors (e.g. reds and oranges) would appear to come out into the foreground when viewed through special glasses. 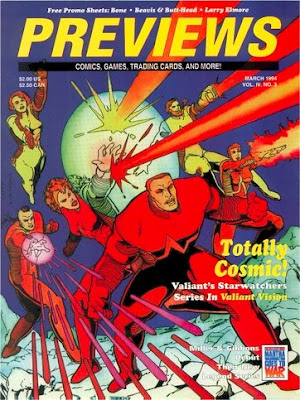 I've never seen the art before but it looks to be the work of Psi-Lords regular artist Mike Leeke.
at 8:18 PM