I've never heard of Up'n Coming magazine (and frankly it has a terrible name) but I like that they decided that the best way to celebrate their 50th issue was to feature X-O Manowar on the cover. 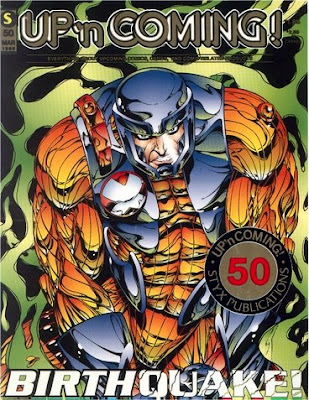 I know I've seen this image by Bart Sears before but I can't place it. It may have been from a promotional poster for BirthQuake.  I'll update the post when I remember where it's from.
UPDATE: Terry Hoknes kindly provided the following background on Up'n Coming magazine: "was a catalogue put out by distributor Styx Publications for distribution for Canadian comic book stores. It ran from 1991 to about 1996. They advertised the hot new release of the month and Valiant got lots of press"
at 11:31 PM