I've never seen this piece by Andrew Wendel and Ralph Reese before. I found it at Roger Clark Art (the url of which is annoyingly stamped on the scan!). It features Ninjak, Doctor Mirage, Timewalker and an Armorine in very un-Valiant like layout - they are all posing, randomly attacking things we can't see, all the opponents are in different directions hence the cross shooting, no one is fighting the opponent closest to them either, oh and they are in some unknown bombed out location... basically everything that Valiant avoids is here. These are all reasons why most of us have probably never seen this before. According to Roger Clark, it was published along with an interview at some point (based on the characters used, it was probably an interview about the third generation of characters Valiant released). 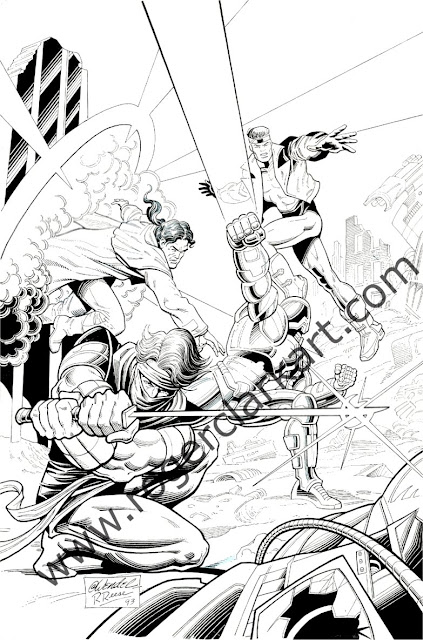 Roger Clark is selling the art for $175 (actually a very good price for a piece that features this many characters). I'll update this post when I track down the interview...the hunt is on!
at 6:31 PM