MTV says bring back Rai and the Future Force

Today MTV posted an article entitled 5 Super Teams In Need of a Resurrection and guess who made the list along with Bucky O'Hare and Marvel's The Defenders? That's right, it's in the title of this post and it's Rai and the Future Force. Check out what they had to say below:

Rai and the Future Force 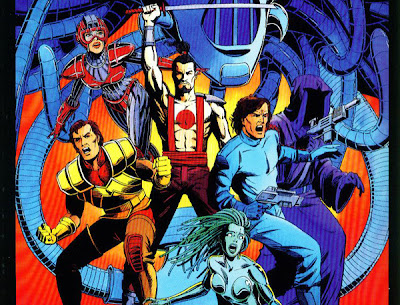 No funny animals in this one. But it did have a guy with super science blood, another guy so good at fighting robots it was in a his name, a lady Iron Man, a lady-bot, and a tough guy who was half spider-alien. Rai and the Future Force was part of the Valiant line of titles, originally spinning out of the series Rai, which was itself wildly popular because of its then-scarcity. Future Force made its bow during the height of the speculator boom, which hopefully gives the ponytail and suspenders a bit of context.

But the series itself: it had the feel of hard sci-fi even if it was just telling action-adventure stories across the ruined wastes of North America (North Am in the parlance of the story). I can honestly say I have no idea how well-written the stories are at this stage in my life, but as a young comic reader who was starting to really form his tastes back then, the series (and much of the output from Valiant) struck me as “mature” in a way that I’d have trouble quantifying now.

Let me try: here the titular lead has a brief affair with the girlfriend of Magnus (the guy who’s so great at fighting robots), resulting in her having his child. The drama of Magnus’ realization occurs in the midst of an attack with our heroes trapped in a cave while the baby is being born. Contrast this with the long-running, almost chaste by comparison Wolverine/Jean/Cyclops triangle that was old when I was a kid.

This entry is I’m sure in part a reaction to simply missing the Valiant line of books and it could totally be nostalgia speaking. But they were part of my formative development as a comic reader so Rai and his band of 41st century heroes are always going to have a place with me.