Bernard Chang is a Valiant Comics discovery. He did his first professional work for Valiant Comics (Archer & Armstrong #9) has gone on to illustrate over 40 Valiant comics and was heavily marketed by Valiant as a hot new Valiant only artist. The Second Life of Doctor Mirage was created partly to give him a book to showcase his talents, he even had a hand in creating the character. After, Doctor Mirage took off Valiant planned to unleash Bernard Chang on Ninjak in a mini series entitled "Rain of Terror". Below is a poster given away at conventions promoting the series. 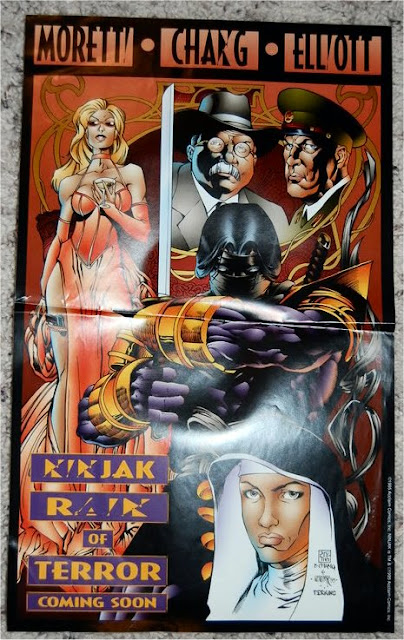 Unfortunately, the art from this poster, a cover and a few interior pages were all that were produced of the series before Acclaim started to rearrange the Valiant publishing slate and canceled the project. To this day very little information has surfaced as to what the story would have entailed.
at 12:55 AM