Check out this unfinished and unpublished cover to an unknown Archer & Armstrong issue by the unidentified artist MAK: 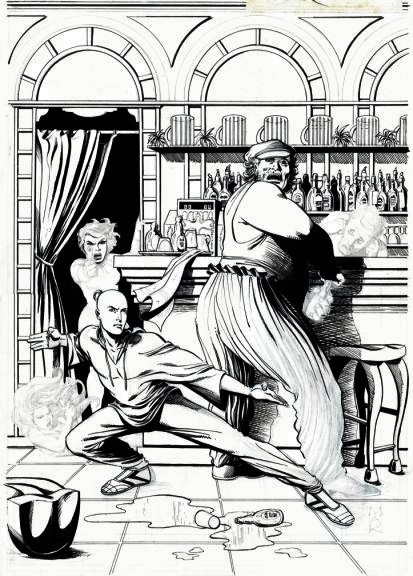 As you can see the cover is only partially inked - a couple of the characters are still just pencils. I have no idea who the two girls on the left are, I suspect they are new characters that would have been introduced in this issue. Unfortunately, I don't know which issue this cover was meant for though I would guess it was created for a inventory issue. Adding to the inventory issue theory is the fact that the cover artist, whose initials are on the cover as MAK, is not someone I am familiar with. I have to say though, it's not a bad cover by inventory issue standards.

Inventory issues are full comics that are created by creators outside of a books regular creative team (usually younger cheaper creators) while the regular creators are working on the ongoing series. The inventory issue is then kept in a draw by the editor until it is needed, for instance when the regular creators fall behind and an issue is needed so that the regular publishing schedule can be kept. Instead of having a book ship late, which can cause a myriad of problems for the publisher, the inventory story is used. Inventory issues are almost always self contained stories so that a readers won't feel too confused by the inventory book being slipped in the publishing schedule. Inventory stories are regularly created and kept in files in case they are needed a year, two years down the road. Often times they are never used!