io9.com has a good article listing "10 superhero buddy movies we'd like to see". There are some obvious choices (Superman/Batman, Spider-man/Human Torch), some interesting one's (Kitty Pryde/Wolverine, Green Lantern/Green Arrow) and some that are just plain right (Quantum & Woody). That's right Quantum & Woody make an appearance on a list made up of heavy hitters, and they rank a very respectable #4. In the words of the author "Make it happen, Hollywood!" 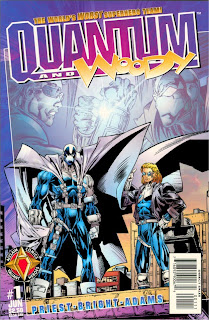 Check out what was said about Quantum & Woody in the article or in the below excerpt:

This comic was the greatest superhero send-up of all time, for my money. But it was also the greatest story of an unlikely friendship between two guys who get superpowers and don't know what to do with them. I've re-read my copies of the trade paperbacks so many time, they're practically just tatters.