Also known as Solar, L'uomo Dell'Atomo #0. Found this on eBay the other day and just had to have it. 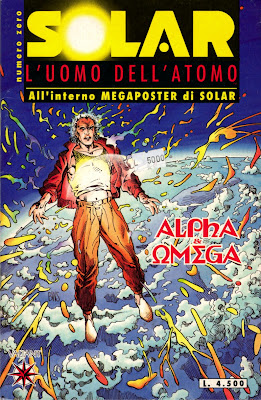 It's an Italian reprint, by a company called Play Press, of the Alpha & Omega storyline that was serialized in the English language versions of Solar, Man of the Atom #1 - 10. The book has a nice card-stock cover but is printed on cheap looking newsprint that makes the colors run and the ink blot: 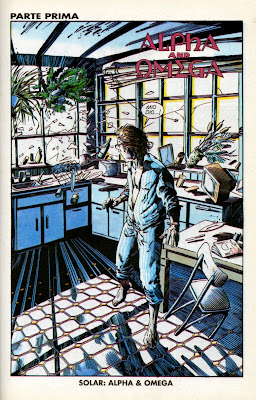 But how cool is it to see Phil say "Mio Dio...!"?? A Solar by any other name reads just as sweet. The back of the book has some ads for other Italian language versions of Valiant Comics - Archer & Armstrong, Magnus Robot Fighter, Timewalker, Turok: Dinosaur Hunter - and even some DC Comics such as Superman and Lobo.
at 7:28 PM