One of the most famous Valiant Comics promotional items is the Darque Brew bottle of beer. Valiant (or Acclaim as it was called then) sent comic book retailers across America incentive/thank you Christmas packages that included a bottle of specially packaged beer in a box with a label that reads "Valiant Comics Darque Brew" and a greeting card that reads "Happy Holidays from your friends at Acclaim Comics". Occasionally, these were accompanied with a letter from Valiant discussing the upcoming event books and promotions. 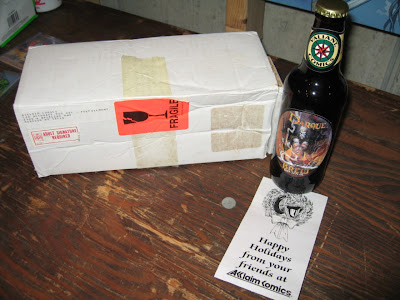 The bottles were brewed exclusively for Valiant in 1994 by the Capital Brewing Company. These bottles have become sought after collectors items, especially when they come complete with the greeting card. Valiant had planned to issue 6 different bottles (I believe one per Christmas) which would then be collected in a six pack holder that would accompany the sixth bottle. Only one other bottle was ever produced - Armstrong Ale - promoted Archer & Armstrong.