Diamond Comics Distributors has a free e-newsletter / blog on all the goings on in the comic book world and at the end of 2008 they held a vote and produced a list of the The Ten Best Collected Editions of 2008. The list included some truly great books and a few all time classics including the definitive Batman: The Killing Joke hardcover and the first volume of the long awaited Creepy Archives. But sitting pretty at #9 is none other than Archer & Armstrong: First Impressions and sitting even prettier at #8 is Harbinger: The Beginning! Both are the first hardcover collections of the stories and both feature kick ass new story pages by Jim Shooter.

Check out the article to see what Diamond had to say about the two collected editions or read the excerpts below. 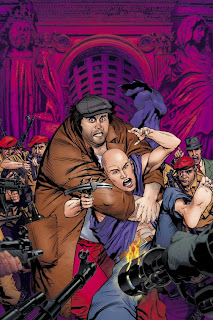 While some of the original Valiant’s first hits were updated versions Gold Key characters such as Magnus, Turok, and Solar, others such as Harbinger were original creations. Out of their core eight titles, Archer & Armstrong was the seventh released and it was one of the most original. It was conceived as a buddy action-comedy that would confront some of the more common clichés of the genre.

The first three issues (Archer & Armstrong #0-2) tied into the Unity event and were written by Jim Shooter. After his tenure, artist Barry Windsor-Smith took over the scripting duties as well. The result, at least for the stories collected in this trade, is a really enjoyable romp with two distinctly different characters who are getting to know each other amid non-stop calamity.

Perhaps because of Windsor-Smith’s art style or perhaps simply because they did a better job, this is the best of hardcover collections from the new Valiant in terms of production. The colors are vibrant and consistent, and of course the stories stand up just fine.

In addition to an interview with him, the collection includes a new short story featuring the origin of The Sect (the group that was seemingly destined to plague Archer and Armstrong during the series’ original run) written by Shooter and illustrated by Sal Velluto. A highly enjoyable read and a must for anyone who wonders what all the fuss was about back in the day. 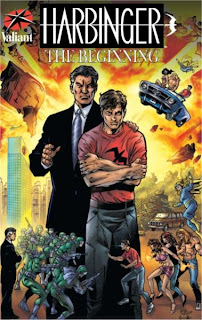 The collection of the origin story arc of Harbinger is something long overdue, and for many years it looked like something that would never happen. While post-Jim Shooter Valiant Comics sold millions of comics, the company quickly slid into the gimmick of the month club and forgot its story-rooted origins. Even when they did publish a trade paperback, it didn't feature the whole story.

This new hardcover from Valiant Entertainment changes all that. Featuring Harbinger #0-7 by Shooter and David Lapham and a new story by Shooter and Bob Hall, another Valiant alumni, this edition is storytelling the reader can really sink his or her teeth into. Unlike some of its contemporaries, the material has aged very well. The new story fits in tightly with the original material, adding nicely to its depth.

The re-done coloring reproduces too darkly in this edition, but if you're interested in the book, don't let that put you off. While it is definitely shy of superb in that area, the rest of the production more than makes up for it. Whether you remember Harbinger in its prime or you've only heard about it, this is a great way to investigate it.